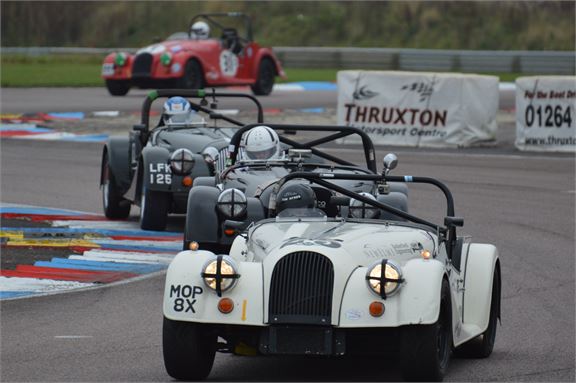 Following a gap of 7 weeks the AR Motorsport Morgan Challenge competitors lined up on the grid under a cloudy sky with rain threatening, but gladly not falling.

The New Elms Morgan Plus 8 had qualified on pole for Class C with joint class leader Sharlie Goddard alongside and Philip Tisdall, one point behind, on the next row.

During the 30 minute race the contest for the class lead was hard fought, with the three drivers all heading the pack at least once.

Fortunately when the chequered flag fell, Tim was leading, followed closely by Philip, whilst Sharlie set the fastest lap and a new class record in the process.

As we now look forward to the final race at Snetterton, Tim leads the class by 2 points from Sharlie with Philip just 1 point further back.

One of these three drivers will win the Class C championship title, the Aero Racing Trophy and be runner-up to Keith Ahlers in the overall Championship standings.